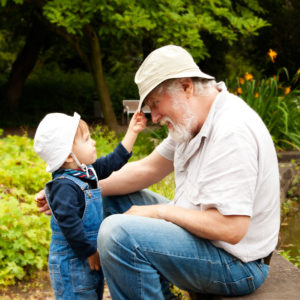 Silus Johnson is a sweet little toddler battling Norrie Disease. Like most little boys affected by the disease, Silus was born blind. Little Silus also has delayed motor skills and a serious lack of muscle tone.

The Johnson family searched for a baby walker that would allow Silus additional freedom and mobility, but off-the-shelf options never quite worked for him. On a mission to find a solution, his grandfather went to the local home improvement store to determine a Do-It-Yourself solution to the needs of his disabled grandson.

It’s here his grandfather found something entirely unexpected: the selfless kindness of strangers.

He explained Silus’ situation to the store supervisor, who decided to put together a team of employees. There, in the aisles of the store, the employees gathered supplies and combined their construction skills to create a one-of-a-kind solution.
After a few days of work, the employees had completed a walker that fit Silus’ needs perfectly. Painted bright green, the walker featured a seat with extra padding to hold Silus’ small frame upright. It was also designed to be adjustable so the walker wouldn’t be as quickly outgrown.

Just three days after initially visiting the store, the Johnson family returned with Silus and he had his first chance to test drive his new walker and meet the strangers who had so selflessly taken their own time and money to help this kind little toddler with Norrie Disease.

Eric Bendel, one of the employees who worked on the special project, shared what it was like to see Silus use his walker for the first time.

“As soon as we put him in there, it was just really cool. He started feeling around on it. You could tell he was happy. He was excited basically. He started laughing and then started using his little feet to push himself backwards. I had a big smile. Everybody had a big smile, maybe a couple little tears here and there.”

Jessica Johnson, Silus’ mother, was overwhelmed by the generosity of these employees, saying, “I’ve prayed for them that God could bless their families because they’ve definitely blessed ours.”

The Johnson family left that day with the feeling of being blessed, increased freedom for Silus despite his limited mobility, and a greater sense of gratitude towards the kindness of strangers.