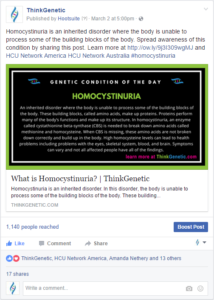 After highlighting Homocystinuria, an inherited disorder where the body is unable to process some of the building blocks of the body, in the Genetic Condition of the Day campaign, ThinkGenetic was contacted by HCU Network America to establish a partnership.

“We are always happy when our awareness campaign not only informs the public,” stated Len Barker, President and Advocacy Partnership Coordinator, “but also brings together great organizations to team up and share resources.”

The mission of HCU Network America is to help patients with HCU and related disorders manage their disease and to find a cure. They also have a goal of creating connections across the community and facilitate sharing of information and best practices through in-person and virtual events and discussions. 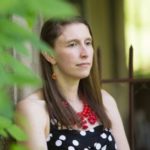 “We (HCU Network America) came across ThinkGenetic when they shared a post about Homocystinuria. We were thrilled to see another organization bringing awareness to not only Homocystinuria, but also other rare diseases.” says Danae’ Bartke, Executive Director of HCU Network America. “Many times Homocystinuria gets overlooked when compared other metabolic disorders. We are excited to add another wonderful resource and expand our partnerships to include ThinkGenetic.”

Both ThinkGenetic and HCU Network America proudly promote each other on their websites and look forward to many joint ventures together. In the meantime, ThinkGenetic is heading to Phoenix for the 2017 American College of Medical Genetics and Genomics (ACMG) Annual Clinical Genetics Meeting in Phoenix, Arizona March 21 – 25 where we will be exhibiting at Booth #834 in an effort to continue to bring awareness of ThinkGenetic.com and the thousands of rare genetic conditions. Learn more at www.acmgmeeting.net. HCU Network America will be hosting a webinar on April 26th to discuss the recently published clinical guidelines on CBS deficient Homocystinuria with featuring Doctor Kimberly Chapman. Learn more at hcunetworkamerica.org.

Ruth maintains strong engagement with patients, partners, healthcare providers, and other communities to further the ThinkGenetic mission effectively and successfully. When not advocating for ThinkGenetic and its community, Ruth enjoys spending time outdoors with her three boys and helping businesses create and maintain a productive footprint online.