Such a sentiment is lived by the millions of individuals and families around the world who go through the genetic condition diagnostic odyssey.

Search the news section on any rare or genetic condition and there is an overwhelming pattern in the stories you’ll see.  No matter what the diagnosis, its symptoms, or the reason for the article, families around the world continue to discuss the struggle and perseverance that is required to receive a diagnosis and find a specialist who could treat their loved ones. 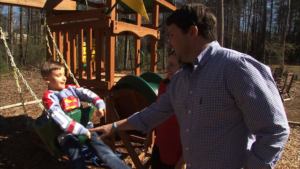 Like an Atlanta family, Jackie and Olin Arnold, whose son, Logan, was diagnosed with Mowat-Wilson Syndrome (MWS). Jackie and Olin described their journey as a “constant search for answers.” Olin’s extensive internet research on Logan’s symptoms resulted in the discovery of a picture resembling him. This resulted in a blood test for MWS from a geneticist found by the family.  Jackie and Olin often find themselves educating Logan’s physicians on MWS since there are only 300 known cases worldwide.

Or parent’s like Katie and Jesse Shelton who searched the first 17 months of their child’s life looking for answers.  Katie explained she felt, “his pediatrician wasn’t concerned, but we were.” Her son, Owen, was diagnosed with Gangliosidosis once they found medical professionals who were educated about the condition and able to identify the tests that would confirm the cause of his symptoms.

The stories of families go on and on.

While the battles, medications and specialists are different, families who live with rare and genetic conditions all have this in common: they push through, they move forward, they find their answers.

Many families cannot find others fighting their battle who lives in their state, or possibly even country.  However, each parent often comments on the unifying power of other families who have also taken “the road less traveled” and who have faced the challenge of discovering answers when none seam apparent.  The desire to continue to fight and search even after being left empty handed.

These families are the inspiration behind ThinkGenetic and our mission to bring together research, education and ultimately answers to families living with a genetic condition or are still searching for answers.