Can you hear that faint thumping? The one that syncs with your heart when you lie quietly in bed after the kids are finally asleep after B-B-B (Bath-Book-Bed)? That is the sound of motivated, unsung teams of hero-advocate superparents and medical professionals banging on a glass ceiling for all of us. Theirs is a reality that most people don’t even know exists, although it unexpectedly crashes into the lives of 1 in 2,000 to 1 in 250,000 Americans.

I don’t say this to scare you, but to shine the light on a fierce, under-the-radar campaign being waged to help everyone have healthier kids by adding key genetic conditions to the recommended uniform screening panel (RUSP) for U.S. newborn screening testing programs. To understand the importance of this fight, you may need a little background that comes with hefty abbreviations (sorry… that’s science and government for you).

What is Newborn Screening?

Did you know that ALL babies in the United States have newborn screening testing done on a small amount of blood taken from their heel in the first days of their lives to see if they have a life-impacting genetic condition?  Unless their parents specifically decline the test, a Band-Aid appears on a newborn’s heel like a flag, signaling the testing is done. News to you? Nurses tell parents before the testing it is being done, but that information can get lost in the usual joy (and exhaustion) of having a new baby. Despite its low profile, the answers doctors get from newborn screening can make the difference between life and death for a baby and allow for life-changing early treatment of genetic conditions. Sounds important for a test many parents don’t even know exist, doesn’t it? 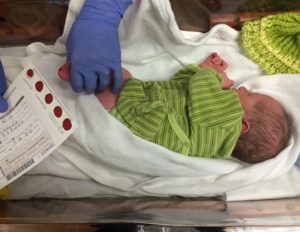 Most newborn screening results are normal. If they are, other than a note in the baby’s chart, parents may never hear about the test again. However, some families hear unexpected and scary news about their new babies that changes their entire lives.

Newborn screening began in the U.S. with the amazing Dr. Robert Guthrie, AKA “The Father of Newborn Screening” who was himself a parent, hero-advocate and scientist rolled all into one. Well before the RUSP for newborn screening was a twinkle in our eyes and spurred on by personal and family experiences, Dr. Guthrie figured out how to test for one common genetic and life-impacting genetic disorder, phenylketonuria (or PKU). He knew PKU could be treated in infancy with a special diet and advocated for all babies to be tested for it as a brand-new public health initiative. Incredible! 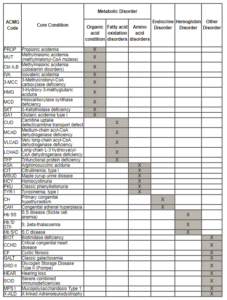 In order to help states prioritize the conditions to add to their newborn screening test, a group of experts were gathered to on a committee, fabulously and simply named the Secretary’s Advisory Committee on Heritable Disorders in Newborns and Children (or SACHDNC, for short). Along with the Secretary of the U.S. Department of Health and Human Services, they put together a RUSP for every state; it currently has 34 main condition recommendations.  The states don’t have to follow the recommendation, but it puts pressure on them to add the RUSP conditions.

Why? Because the SACHDNC thoroughly reviews the scientific evidence on conditions and tries to add only those that meet key hurdles, like: has accurate testing that can be done on a dried blood spot, has proof that it would make a difference if it is found early, and has an effective treatment. Those are high hurdles to meet for a rare genetic condition, even if there are motivated family members and interested scientific experts. It can feel like being trapped beneath a thick, shatterproof glass ceiling trying to break through.

Despite the thick glass, there are amazing examples of hero-advocates and medical professionals working hard to gather the evidence needed to successfully lead to the addition of conditions such as severe combined immunodeficiency (SCID) Pompe disease, mucopolysaccharidosis type I (MPSI, also called Hurler, Hurler-Scheie, or Scheie disease), X-linked adrenoleukodystrophy , and (any day now) spinal muscular atrophy (SMA) to the RUSP.  As patient advocacy group National MPS Society said in 2015 when MPSI was recommended for RUSP inclusion, “This is a huge success!”

As you may expect, hero-advocates are working hard every day to nominate and support other genetic conditions, ranging from Krabbe disease to guanidinoacetate methyltransferase (GAMT) deficiency. They have banded together with their allies and made a road map of each data point needed for review and approval. Working together to gather people supporting their cause emotionally, scientifically, and financially – including family members, supporters, advocacy groups, doctors, legislators, and scientists – they aim to prove the need for early testing, effectiveness of testing and treatment for their condition. It is often emotionally draining, time-consuming, and frustrating. As Janis Sherwood, one hero-advocate mother, told The San Diego Union Tribune in 2016, “You have to shut so much down to be able to go out and talk about your dead son every day. It can be really hard, and it does come to a head every now and then. You just kinda let it come and just know that, in your heart of hearts, it’s all in his honor.”

One poignant example is the team of advocates, parents, and scientists, working to have GAMT deficiency added to the RUSP. As Kim Tuminello, Director of Advocacy and former President for Association for Creatine Deficiencies (a ThinkGenetic Advocacy Partner) said, “GAMT is exactly the type of treatable diagnosis that RUSP is looking for! All of us here today have had many physicians who have said ‘this should be a slam dunk / a no-brainer… .’” It is at the point where the detection of just one newborn through newborn screening in the United States will go a long way to getting approval for GAMT to be on the RUSP.

Not every genetic condition is appropriate for newborn screening and some may never meet the criteria for inclusion. For those conditions that are good candidates, I’d like to offer a huge “Thank you!” and virtual support for the super-advocates gathering the evidence to support adding these conditions to the RUSP. I applaud their dedication, collaboration, and hard work. Hopefully this story opens one small window into the world of some of the unsung hero-advocates of genetics: the army of those gathering the data needed to help decrease the time to diagnosis and treatment of life-changing genetic conditions in our babies across the country.

I leave you with the wise words from one U.S. parent and hero-advocate, Stephen Holland, which could be used for many genetic conditions:

“We are all blessed to live in the greatest country in the world where we have the ability to prevent most, if not all, of the permanent damage… by providing parents with treatment options at birth. So let’s do just that.”

As a Founder of ThinkGenetic, Inc., Dawn Laney is responsible for directing the inclusion of genetic disease information and making important connections to those in the genetic field. Laney received her Master’s degree in Human Genetics/Genetic Counseling from Sarah Lawrence College in 1999 and her Board certification from the American Board of Genetic Counseling in 2002. Since joining the Emory Division of Medical Genetics in 2002, Laney has been involved in follow-up of abnormal metabolic newborn screening for the state of Georgia, development and management of a genetic infusion center, and lysosomal storage disease clinical care and research. She is currently the Program Leader for the Emory Lysosomal Storage disease center and Director of the Emory Genetic Clinical Trial Center. She serves on the Emory biomedical Institutional Review Board (IRB) committee and is instructor for the Developmental Biology and Human Malformation course at Emory University. In 2016, she was awarded an NORD Rare Impact Honoree. She has published six books about communicating information about genetic conditions to kids and their families.