Sometimes (read: most of the time), I think we as a society are pretty spoiled. Unlike our ancestors, we live in an age where many medical conditions and ailments can be “cured.” Because of this, it’s no surprise that families living with genetic conditions are surprised or disheartened to hear that there isn’t a cure for their diagnosis. Sure, medical treatments and care for people with genetic conditions have grown by leaps and bounds in the past few decades. But the promise of a cure? Not until today. 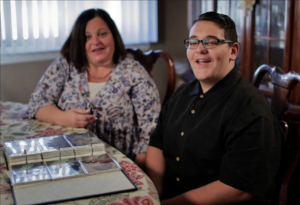 Beth Guardino, left, and her son, Christian, talk about his life before and after gene therapy for his hereditary blindness. (Julie Jacobson/AP). www.washingtonpost.com

You may have heard that the Food and Drug Administration (FDA) recently approved a new therapy for patients in the U.S. with a rare genetic form of childhood blindness. Not just any therapy, though — a gene therapy, something that introduces a working gene into the body to compensate for a gene that is not working properly because of a change (or mutation) it has in it.

This is the first time in history that the FDA has approved such a treatment for an inherited disease. But why is this getting so much press? Gene therapy is the closest we’ve come to being able to cure genetic conditions. As my genetic counselor coworker Allison would say, “Two thumbs way up!”

So what’s taken so long? While it may seem simple to go in and correct a harmful change in our DNA, it’s incredibly difficult to do so without also changing or damaging the good DNA surrounding it. Historically, gene therapy has been controversial, with the 1999 death of Jesse Gelsinger, a young man with ornithine transcarbamylase (OTC) deficiency, being the harshest lesson to learn. It has also been very difficult to make the corrective change in enough cells throughout the body to make a difference. This new gene therapy treatment not only makes the necessary correction, but also avoids causing other genetic damage.

The new treatment, called Luxturna, treats children and adults with autosomal recessive retinitis pigmentosa (RP) and Leber congenital amaurosis (LCA) caused by changes (or mutations) in the RPE65 gene. This gene provides instructions for making proteins that allow the retina, the area of the eye that responds to light, to function properly. Mutations in this gene can cause the proteins to be made improperly or not at all, leading to damage to the retina and difficulty seeing in low light environments. Luxturna provides a normal RPE65 gene right to retinal cells, which then make the protein needed to improve vision.

It’s important to note that although Luxturna has been shown to improve vision in these individuals, it does not completely restore vision to normal. However, even this improved vision improves quality of life. After Luxturna, people with these conditions have been able to see at dusk and in darker rooms. 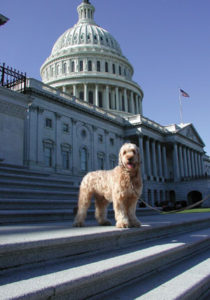 News of the FDA approval wasn’t the first time that many heard of this treatment. The team that developed it also worked out the related mechanism in a canine model back in 1998. This photo of Lancelot, the first dog treated with this particular therapy, has been stored in the back of my mind for years.

Luxturna involves a single injection into each eye. While this may cause some of you to cringe, the price tag is also cringe-worthy – $425,000 USD for each eye. Rare diseases are expensive and U.S. health insurance policies are often not designed to cover such costs. Considering approximately 10% of the U.S. population is living with a rare disease, 80% of which are believed to be genetic, it’s almost guaranteed that new gene therapy treatments will be developed in future. They may also be accompanied by the development of non-traditional payment models so that insurance companies can cover the costs.

One of my least favorite responsibilities as a genetic counselor is having to inform a parent that there isn’t a cure for their child’s genetic condition. While I don’t expect things to change overnight, the future looks bright.

Want to learn more about how gene therapy works? Check out the FDA’s information here.