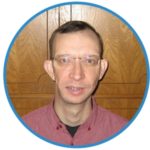 Editor’s Note: I am overjoyed to share this informative piece written by a gentleman who first contacted us through the Ask a ThinkGenetic Counselor service almost a year ago. Through our numerous email exchanges, I’ve found Deon’s dedication and excitement towards learning about his own genetic condition to be both encouraging and moving. Deon is a true self-advocate and I believe others could learn from his story and advice. – MS

Did you know that people living with rare genetic diseases visit an average of seven doctors before receiving an accurate diagnosis? Seven doctors! Also, this process can take several years and is very hard, mentally and physically, on patients and their families. In many cases, people seeking a diagnosis will be given a wrong diagnosis, leading them into a whirlpool of misinformation and heartache.

Self-advocacy is one of the most powerful tools patients and their families can use to avoid that whirlpool of misdiagnosis and misinformation. Self-advocacy takes some work as it can be intimidating to send medical experts back to the drawing board, especially when you aren’t sure what is wrong.  However, it’s important to trust your instincts and insist on a second opinion, or even a third or fourth. This is also how you find those special doctors that go above and beyond to deliver the kind of care you need to find the right answer.

The modern take on this code of ethics essentially states that physicians should treat ill patients using their best judgment, help instead of harm, and serve as a positive example for others. For people who have a genetic disorder, it is imperative to find doctors who not only uphold this oath but go that extra mile for you. My pediatric surgeon is one of those doctors. Hopefully my story will help you find one of those doctors too. 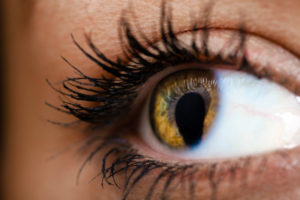 An example of Coloboma. Retrieved from NIH Genetics Home Reference.

I ended up with an imperforate (blocked or missing) anus that was discovered about 24 hours after my birth because I was not passing stool. You can imagine my parents’ shock.

Before my condition was diagnosed, I was incorrectly thought to have Trisomy 21 or Down’s Syndrome. My pediatric surgeon felt I did not show the common features of Down’s, so he ordered more advanced testing. He brought in a pediatric geneticist that he described as “a true scientist!” That geneticist diagnosed me with Trisomy 22, a very rare birth defect, which was clarified later as tetrasomy 22 resulting in Cat’s Eye syndrome. I was the only one living out of six people known to have this condition in the U.S. 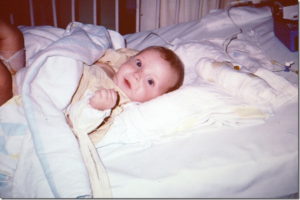 Seven months later, my parents brought me to my primary care physician after I had not urinated for several hours. We were then referred to the acute care center where I was diagnosed. My parents assumed that my pediatric surgeon would be in charge of my care, but I was actually placed under the care of a urologist who took me to exploratory surgery to find out what the problem was. My pediatric surgeon found out about this and alerted my parents. He wanted to assist in the surgery because he was familiar with my condition and had done previous operations on me. The only catch: they had to request him. They gladly did.

While in surgery, the urologist’s search proved unsuccessful. An ileostomy, a surgical operation in which a piece of the ileum is diverted to an artificial opening in the abdominal wall, was the only viable option left, so my pediatric surgeon asked if he could examine me. He felt around and successfully located a kidney stone over my urethra that was blocking urine from exiting.”. Shocked, the urologist said, “He is all yours. Take over and finish the surgery!”

This surgery was one of five major surgeries done in my first year to improve my quality of life. I also had a colostomy, a double hernia removal, a right kidney and appendix removal, and a three-stage colorectal pull-through — all performed by that same pediatric surgeon.

Had he not taken the time to ensure I received the correct diagnosis and subsequent care, who knows what condition I would be in today.

In 2004, I applied for jaw surgery on ABC’s Extreme Makeover, but I never heard back from them because of my birth defect and the extensive and detailed work that needed to be done. My childhood dentist — who was a lot like my pediatric surgeon — had heard through my cousin that I had applied and called me a year later. He surprised me by funding all the orthodontic work and oral surgery I needed. He is yet another example of a doctor who went above and beyond to make my life better.

Finding the Best Care is Up to You

It is so important that parents with a child who might have a rare genetic disorder ask questions and push for doctors like my pediatric surgeon and dentist who will go above and beyond for them — doctors who will not only provide excellent medical care, but who will establish life-saving relationships with you and your child. They will take the extra time to listen to your concerns and answer every question you have. They will walk through the journey with you in the midst of the medical unknowns and be considerate medically, financially, psychologically, emotionally, and/or spiritually.

How do you find one of these amazing doctors? 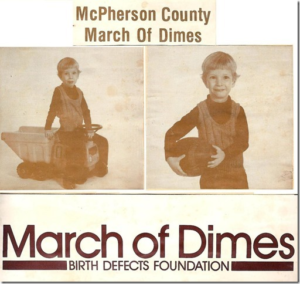 Here are some tips: