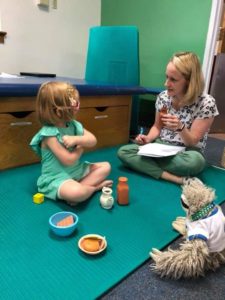 Molly bobs around the clinic room, her strawberry blonde hair bouncing with every move. She has spread out her array of toys – stickers, books, a baby doll named Jack Jack (like in The Incredibles™ ) and some bright pink putty that as you would expect, gets everywhere. You’d think she was in for a well check exam with her pediatrician until you notice her glittery pink leg braces reaching up from her tennis shoes to just under her knees. These are her AFOS, ankle foot orthoses, that help her to keep her legs from hyperextending and her ankles from turning in. Molly has Pompe disease, a genetic, progressive neuromuscular condition that was once thought to affect about 1:100,000 but now is thought to affect as many as 1:10,000 individuals.

Molly was diagnosed shortly after her 2nd birthday as her parents and pediatrician were concerned that she wasn’t walking on time. She quickly picked up this skill with physical therapy, but continued to show signs of weakened muscles and frequent falls. At first she was thought to have spinal muscular atrophy (SMA), another genetic muscle condition, but testing was negative. Only at this point was the diagnosis of Pompe made.

Pompe can range from a very serious presentation in infancy in which the heart is enlarged and breathing is extremely difficult to more subtle symptoms of muscle weakness and fatigue which while debilitating can take decades to diagnose properly. All cases are caused by the same enzyme deficiency, though individuals who have more of the enzyme, yet less than the normal amount, tend to have a less severe presentation than those with virtually zero enzyme. Pompe disease in its more attenuated form can be difficult to diagnosis as it’s symptoms overlap those of many other muscle conditions. The medical community has adopted terminology describing the presentation of cardiorespiratory involvement as “infantile” Pompe and the forms lacking it “adult” or “late” onset Pompe. Because Molly’s heart was normal at birth and her symptoms did not present until later in her development, she to is considered to have “late” or “adult” disease despite her tender age.

Molly’s story is all too common, with patients exhibiting symptoms for months or in some cases years, before the correct diagnosis is made. Proper diagnosis of Pompe is not only important to give families an answer and a name for their child’s symptoms but has prognostic effects too –  Pompe can be treated with enzyme replacement therapy, making the differentiation of Pompe from other muscle diseases all the more important. As with all progressive diseases, earlier treatment yields the best outcomes, making the importance of timely diagnosis of the utmost. Molly was fortunate to have a set of parents persisting for answers to their questions and a medical team with a relentless effort to match. Molly was started on enzyme replacement therapy and continues to make gains and thrive, despite her diagnosis. Some patients are not as lucky; with publications citing a diagnostic delay of over a decade in some cases, meaning precious time lost without treatment.

This has led to the addition of Pompe disease to newborn screening in many states – a public health initiative focused on early diagnosis allowing for early intervention and improved outcomes. While the benefits of newborn screening sound perfectly practical and positive, families who have been on the receiving end may disagree, at least in the beginning.  For parents, a positive newborn screen often means a terrifying phone call with few answers from their newborn’s pediatrician. Further complicating this matter is the often outdated and bleak information about Pompe one finds when they research Pompe disease. The wide spectrum of severity and the pre-treatment lethality for children with the severe form makes the wait for an appointment with a specialist agonizing for families.

Newborn screening is a statewide endeavor, meaning that each state is responsible for choosing which conditions to screen their newborns for. There is a Recommended Universal Screening Panel; however, states often adopt new disorders in a snowball manner with a few states starting out to “test the waters”. This was the case for Pompe disease. At this time, not all states are screening for Pompe, meaning that children affected with Pompe who are born in those states will need to rely on dedicated physicians and devoted parents to find their diagnosis.

Finding Answers and Community – The Birth of a Mascot

After the initial shock of her diagnosis of Pompe, Molly’s family began hunting for resources. The internet afforded them a unique digital age opportunity that families in generations past were not fortunate enough to experience. Molly’s family was able to connect with others around her state and the US with Pompe, and find a source of comfort and support there. The family also learned of gatherings in which patients and families with Pompe can come together to learn, socialize, and feel a sense of normalcy in a life that far too often seems less than “normal”. 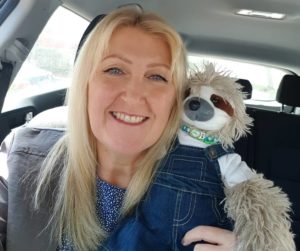 Thousands of miles away sits Julie Garfield, a woman in England who has Pompe disease herself. Julie has some enzyme produced in her muscles and did not suffer from cardiac symptoms as an infant, so  was diagnosed with “late” or “adult” form of Pompe, despite her harboring the causative genetic changes since the day of her birth. This confusing terminology means that Julie represents Molly’s possible trajectory without access to early treatment; the exact purpose of the newborn screening initiative.

As Molly’s parents, Julie also took to the internet after her diagnosis. She became involved in a private Facebook group for women affected with Pompe disease, allowing her to engage her peers on any topic she could imagine. One day, a picture of a sloth was posted and the group quickly adopted the sloth as their “spirit animal”.  Julie enjoyed the idea of the sloth so much she purchased a stuffed sloth of her own. When considering what to name her new friend, she turned to the group that introduced her to the concept and the new addition was christened “Hope”. Julie repurposed a bracelet with the word “hope” on it, a gift from a patient in the United States, as a collar for the new member of her family. And so Hope the sloth was born.

After sharing Hope with members of the online Pompe community, Julie inquired whether anyone would be interested in a visit from Hope. The response was overwhelming – “people from all over the world, children, parents, grandmothers of Pompe family members” reached out hoping for a visit from the now famous mascot. As Hope’s traveling calendar became fuller and fuller, Julie realized she might need help, and so, for her 50th birthday in lieu of a party, she asked family members to sponsor additional Hopes that could travel around the world to patients and their families.

Julie recognized that Hope could serve as a source of identity for the Pompe community, something that they can call their own and take pride in – a plush embodiment of the strength and curiosity of those affected with Pompe disease. Hope, a sloth, can do anything that you or I can do, though she may do it more slowly. Hope became the perfect representation for a movement of awareness, support, and community. 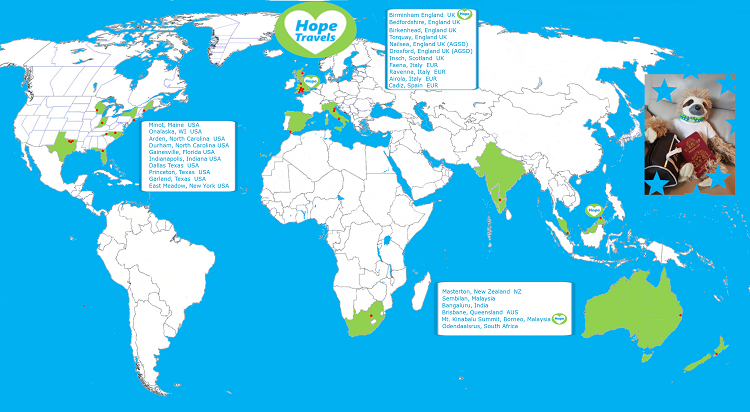 There are many variations in the Hope family. First there are Baby Hopes that live with patients and accompany them to all their activities – vacations and doctors’ appointments alike. There are Traveling Hopes who visit all over the world, visiting Baby Hopes, both of the sloth and human variety, to learn more about Pompe. These Traveling Hopes usually stay with patients for a few weeks and do everything that they do – go to school, get dirty on the playground, and maybe go for an infusion or two. And perhaps the most academically inclined of the Hope Family are the Doctor Hopes, who are working hard at Pompe medical school and graduating all the time, and with a little help from Julie, land at universities and hospitals all over the world to treat as many as possible. Julie calls her mission Hope Travels. She partners with Mark Nicholson, the technology savvy portion of the partnership who ensures that Hope’s adventures are cataloged for everyone to see. 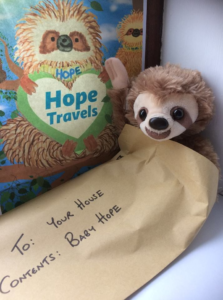 Hope has even made an appearance in other countries outside of the United Kingdom and the United States. Recently, Hope climbed the Mount Kimbalu with Siva SK in Malaysia to raise awareness and funds for the Pompe community there! All of Hopes adventures are captured on the Hope Travels – Pompe Awareness Group on Facebook. To learn all about Hope’s adventures you have to join the group, but after that you can follow Hope all over the globe. She has made stops all over the US and visited Spain, Malaysia, India, Italy, Scotland, and is currently en route to South Africa.

Identifying a mascot or a character to define pediatric diseases can give children a way to be proud of their experiences allowing them to cope more effectively. It also gives children a sense of comradery with other patients and a platform to speak about their disease with those who may be unfamiliar. Instead of a child being embarrassed by their leg braces, or needing to use a walker when they get tired, they can teach their friends through the mascot about how Pompe makes them a bit different, but mostly just the same. Having a mascot like Hope also gets children excited, something that children with chronic illness, particularly those who receive frequent treatment, need. There is an inherit identity in seeing sloths in books, on back to school gear, or even as a snuggly buddy to have at bedtime.

“I wish everyone could have a visit from Hope. I’m trying my very best. My birthday money soon ran out, but my husband now kindly funds it along with help from groups such as the Harmony School of Business in Dallas, and although we have slowed down, I’m still sending them when I can. Some days I am on my phone constantly, with coordinating visits, and queries about fund raisers etc, but I am really enjoying it”

In the menagerie of toys that Molly has strewn about the clinic room, fits two parents, a geneticist, a genetic counselor, and an observing medical student. And a Traveling Hope. When you ask Molly about her, she lights up, telling you all about the adventures she had at the aquarium and that Hope would be going to visit another family at the end of the week but would likely come back to see her sometime. But Molly has another surprise. She and her family raised funds and purchased Baby Hopes for all of the children attending the conference that weekend, complete with their very own individual birth certificates. Her excitement to share the Hopes with her new friends is infectious. Molly’s family is sure that these new members of the pompe family will bring excitement and pride to all the children who carry them to infusions, show and tell, or just to bed at night.

After returning home to the usual grind of the school year, Molly walks around Hobby Lobby with her mom. She spots a sloth on a display and makes a dash for it, scooping it up in her arms and holding her tight. Her mom hears her whisper “Ohh Hope I knew you’d come back to me! I love you!” 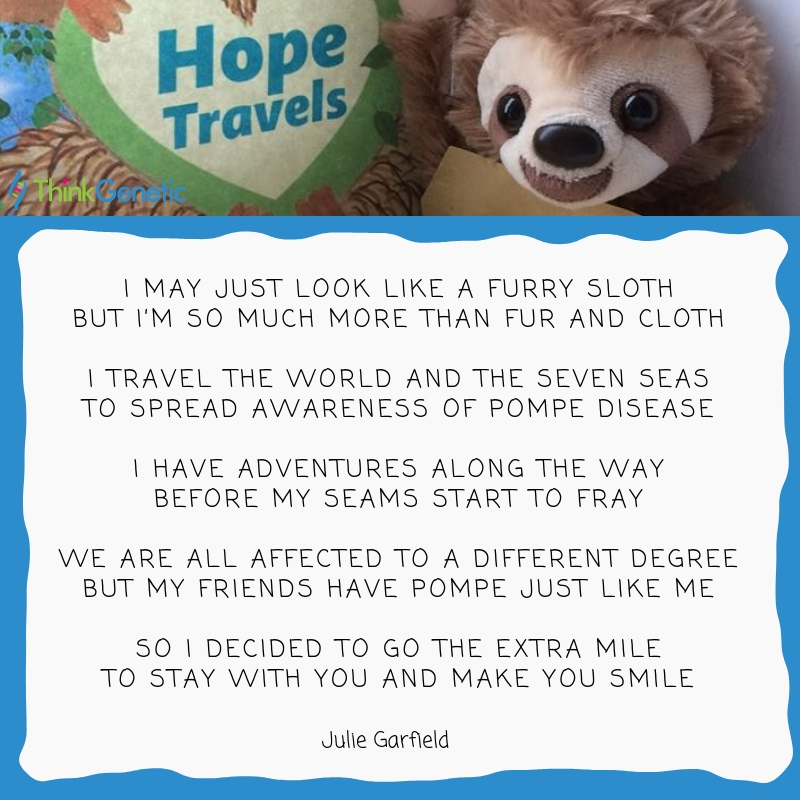